Okay, so this post is a little out of the ordinary. I want to discuss a movie and a filmmaker that (IMHO) are extraordinary. Waitress, written and directed by the late Adrienne Shelly is one of my favorite films. Since TCM killed it last month with their Trailblazing Women in Film programming, I thought I would bring attention to a very underrated female actress/writer/director. But, first a little background.

The late Adrienne Shelly got her start as an actress in the late ’80s. She starred in films directed by Hal Hartley (Trust, The Unbelievable Truth, etc). They were quirky and strange and its very easy to see how much Hal influenced Adrienne when you watch Trust and Waitress back to back. 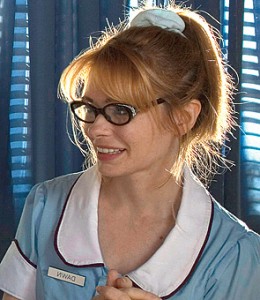 I was introduced to Shelly’s work when I saw Waitress in theaters at 15. It made an impression on me for many reasons. On a purely cinematic level, I was amazed at not only the poignancy of the writing but by Shelly’s directing choices. She had many sequences where her main character played by the lovely Keri Russell took whatever she was feeling and created a new pie in her head.

Waitress follows Jenna Hunterson (Keri Russell), a small town waitress with a bad husband (Jeremy Sisto). Her only escape is in inventing new pies at the shop she works at. She gets pregnant which puts a dent in her plan to escape her husband. As such, she feels apathetic about her pregnancy and starts to write a letter to the baby. In it, she puts the whole truth, about how broken she feels and that she doesn’t know what she has to offer her child. Its resolution is about empowerment and the overall message that it’s never too late to start over.

I love the film because it is simple and genuine. It doesn’t have some fancy high concept. It is just a little story about a small town waitress. The heart of the film is so clearly the heart of Adrienne. One of the things Adrienne said inspired her to write this film was the feeling of self-doubt and apathy she, herself, felt when she found out she was going to have a baby. She felt like no one had addressed that feeling in a movie.

A few months before the film’s premiere at Sundance, Shelly was murdered in her Greenwich Village office. I remember coming out of the movie and seeing tears in my father’s eyes. When I asked him why he was crying, he told me about Shelly’s death and also about her three year old daughter’s cameo at the end of the film. Shelly was only 40 at the time of her death and she never lived to see the movie succeed. If she had lived, I have no doubt she would be doing very well.

I’m very much of the belief that you should judge an artist not on a career, but on specific projects. Yes, Shelly’s untimely death was horrific and extremely sad. But, she left behind a piece of herself with this film, a film which will continue to inspire filmgoers and hopefully aspiring female writers and directors. Her husband, Andy Ostroy, established the Adrienne Shelly foundation, which offers grants to female filmmakers or female actresses trying to transition to directing.

The film is so many emotions at once. It is a true women’s film, very clearly directed from the female perspective. If you’re committed to the movement #52filmsbywomen, then you should consider adding this masterpiece to your list. Also, as an added note, Waitress the Musical is set to open on Broadway in March 2016. Sarah Bareilles wrote all the music so you know it’s going to be amazing!

P.S. – If you’ve never seen the film and are planning to watch it for the first time, buy yourself some pie first! Just a suggestion. I can guarantee you’ll want some.

One thought on “Adrienne Shelly’s ‘Waitress’: A Modern Classic”