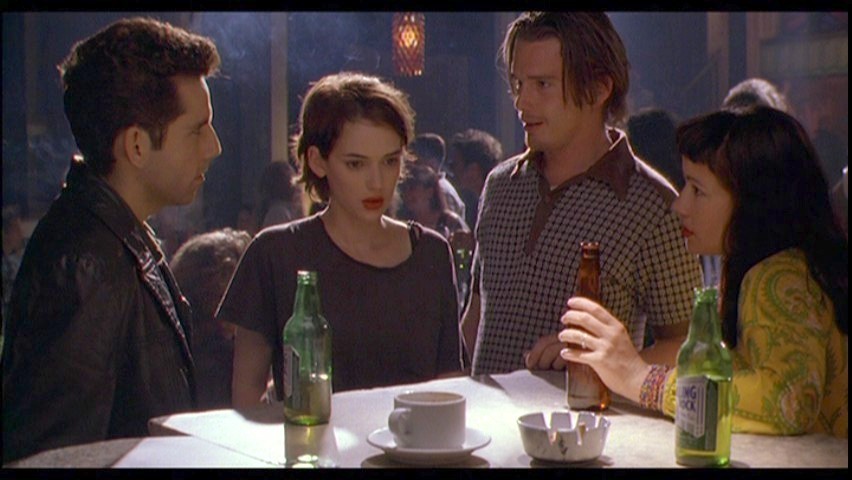 Two years ago, just after I had graduated college, I started my first full-time job. To say I had no idea what I was getting into was a ginormous understatement. I was nervous and filled with expectations: from teachers, parents, mentors. The stress of this time caught me off guard. I had always been so sure of my decisions and for the first time, was truly confused. It’s strange. You’re an adult by all the normative standards, but you still feel like a kid and that dichotomy can be extremely overwhelming.

Much has been done about this time in a young person’s life. Most recently, the best example has been the HBO series Girls. However, it was another film which comforted me. I had seen Reality Bites in passing in Netflix, but never really thought much of it. I didn’t think it was very highly regarded. But, one Saturday night, when I felt too depressed to go anywhere, I decided to give it a shot. That experience of watching a great movie for the first time is an amazing high; but one that touches you, makes you rethink something in you life or comforts you, that’s on another level. Watching this film made me understand that what I was going through was not specific to me and that was immensely reassuring. And it wasn’t just because Ethan Hawke was dreamy…though I’m not debating the issue.

Reality Bites, made in 1994, follows Lelaina Pierce (Winona Ryder), a recent college graduate trying to get her foot in the door as a PA on a local Houston talk show while also making a documentary about her friends: Troy Dyer (Ethan Hawke), Vickie Miner (Janeane Garofalo), and Sammy Gray (Steve Zahn). She also meets Michael Grates (Ben Stiller) along the way, a young television executive who believes in Lelaina and her talent. Lelaina’s relationship with Grates obviously complicates her relationship with Troy. But, the film is more about a young person accepting that they don’t have it all figured out – which is probably why I connected to it so much.

Reality Bites was, among other things, Ben Stiller’s directorial debut. Having known him as Derek Zoolander, it was interesting to see another side to him, especially as I watched the special features and heard him talk about how scared he was to take this on. I love the story of the film’s inception, which started with producer Michael Shamberg who wanted to make The Big Chill for Generation X. Shamberg took a general meeting Helen Childress, a young screenwriter fresh out of USC. Liking her writing, Shamberg became intrigued when she talked about what she saw in her friends lives and her own at the time. She spent about a year hashing the idea out with Shamberg, really figuring it out what story they wanted to tell. Then, they brought on producer Stacey Sher and tried to figure out to get the film made.

At the time, Winona Ryder was the biggest young actress in Hollywood. She was wanted by everyone and by her own account, Reality Bites just happened to come along at the right time. The script was expressive of her age and her generation. She is the reason the film got made. Without her, their financing would have been gone.

Ryder liked and pushed for Ethan Hawke as the film’s romantic lead, even though she didn’t know him that well. While much can be said about whether Hawke’s character is the ideal “bad boy” or just an asshole, his chemistry with Winona is a big reason the film works.

To me, the film is also special because of the way it really captured the early ’90s. Obviously, there were no cell phones and the boys wore baggier jeans, but beyond that, it really is a snapshot of a point in history. Years from now, people can look back at this film and get a feeling for the fashion, the music, how people lived before the world wide web. And at the same time, it’s amazing that I can watch the film and relate to the characters and their feelings so much. We think we’re the first to experience these emotions, but they have been repeating themselves I’m sure in every generation.

What I love most about the film is that the characters are truly imperfect. They feel real and I think it’s really because Helen was that age. She didn’t have to think about young people sounded. She was one. Having now been out of school a couple years, I think Reality Bites is even more poignant. I’m interested to see how my opinion changes over the years. Helen Childress now says she watches the film, relating to Michael who’s older and more practical than the other characters.

The film commented on what it was like to work, pay bills and have your ideals torn down. One of my favorite lines in the film is Sammy’s: “My goal is …I’d like a career or something.” The idea of a career still seems funny at 23, unreal.

Still, for me, it is one of those films that I will carry with me. I think it’s a modern classic, not just for its wonderful (and mostly full of newcomers, at the time) cast, but because it was coming from a real place and you can see the heart in the characters and their feelings. Plus, it’s dialogue is on point and its soundtrack is appropriately and wonderfully 90s.

If you haven’t seen it, I recommend giving it a chance. If for no other reason than this scene…