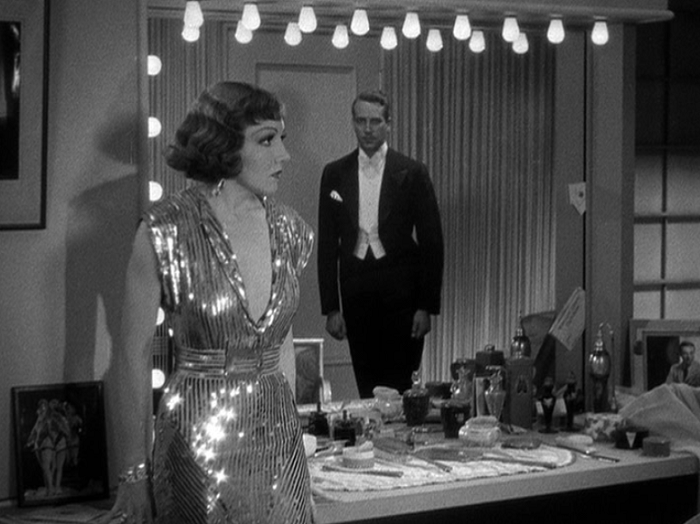 As anyone who’s read my movie musings knows, I love Claudette Colbert as evidenced by my posts on It Happened One Night and Midnight. There’s another favorite of mine (heck, I love most of her films) called Torch Singer. This one has become a particular favorite of mine partially because it was my introduction to pre-code cinema.

If you’re unfamiliar with the term pre-code, it describes the period between roughly 1930-1934 when censorship was not enforced in Hollywood. As such, the storylines, characters, and innuendo they got away with seem outrageous considering the rules which did end up being enforced from 1934-1968.

Some of those rules included not allowing couples to be shown in the same bed, at the same time, banned curse words, as well as not making any sort of immoral behavior look attractive or beautiful. Now, obviously filmmakers found a way to get around those rules to a certain extent, but there is something fascinating about films made during the pre-code era.

If you’re unfamiliar, Torch Singer, made in 1933, follows Sally Trent (Claudette Colbert), a woman who finds herself in a difficult situation when she becomes pregnant. She has the child and even raises her for a time, before realizing she’s just not making enough money. Ultimately, she gives up the baby for adoption. Meanwhile, the father of the child, Mike (David Manners) leaves the country, not having known about the baby in the first place. Sally changes her name to Mimi Benton and becomes a successful torch singer, drinking and partying in excess. Mimi then gets hired as the host of a radio talk show for kids and soon realizes she can use the show as a means for finding her daughter and as always…DRAMA ENSUESSSS.

Here are just a few reasons you need to check out Torch Singer!

This movie, to me, is all about Claudette Colbert. It’s a fairly short film and she carries it. She finds a way to have you like her character, despite some of the bad choices she makes. This was still a year off from It Happened One Night, and obviously much more “out there,” but it’s still our same Claudette, sassy as ever!

David Manners, who was famous for his roles in horror films like Dracula and The Mummy, plays Sally/Mimi’s love interest, Mike. I’d like to say he plays a big part and you feel so much when they’re reunited, but honestly, he’s okay. It’s Claudette’s movie.

Here we get to the fun that is pre-code. The lines are hilarious and pushing boundaries. The screenplay based on the story “Mike” by Grace Perkins, was adapted by two women, Lenore J. Coffee and Lynn Starling. As such, there’s a sensitivity to the script that I think sets it apart from other “women’s pictures” which were written by men. The story itself was tabboo just in showing an unwed woman becoming pregnant in the first place, not to mention the real doubts she has as to what kind of mother she will be. It definitely feels like it’s from a female point of view.

Additionally, I love that the star of this film is not the romance, but the reuniting of a mother and her child. That is where the emotional weight lies in this film, not with her ex-lover, but with her daughter. For a film that’s only a little over an hour, Torch Singer and Colbert’s performance has a lot to it.

Okay, there’s just too many good ones not to share a few:

and this one where Mike tells Mimi she’s become hard:

I’m also a musical fanatic as most people who know me know and as such, I get a kick out of seeing Claudette sing her torch songs with her raspy, yet still beautiful, voice.

It’s a sweet, feminist melodrama and a great introduction to pre-code cinema!

Written by two women, starring a woman, and about a woman’s struggles, this film is definitely a #FeministClassic and it’s great way into pre-code cinema, where women really got their chance to shine, in shades of grey as all different kinds of people. There’s no trailer for the film unfortunately, but take my advice, go out and buy the Pre-Code Hollywood Collection set from Universal. It’s one-hundred percent worth it and I promise, you’ll be a pre-code convert after devouring those films!

Yesterday, film historian and TCM host Robert Osborne passed away. While some of you who read my blog may not be familiar with his name or even his face, his death is one of the “celebrity” deaths which has hit me the hardest. I’ve spoken about TCM a lot on this blog as well as the experiences I’ve had attending the TCM Film Festival the last seven years (omg how has that much time passed?!), but I haven’t said much about Osborne himself.

To be fair, most people who meet me wouldn’t think I had much in common with Osborne. I grew up in the age of social media and smartphones. Many friends and acquaintances think my classic film obsession is strange…even though they don’t say it. They don’t quite understand it. Some of my favorites reactions…”They [classic films] just don’t hold my attention” or “they’re too slow” or “Ugh, they’re in black & white”or “the acting was not real enough.”

So, to put it mildly, I spend a good deal of time defending classic film. Nevertheless, I take pride in introducing my favorites to friends/random people I meet on the street. I feel that I’m one of the lucky ones. I was indoctrinated with a love for classic film through my dad. His encyclopedic knowledge and love of film had a huge impact on me. We would routinely spend nights together watching a movie on TCM and so, I got used to Mr. Osborne and his intros. He was a part of the family, in our living room, almost every night.

Osborne, who died at the age of 84 was the host of TCM was for over twenty years. But, he had had a career before that. He started as an actor in the fifties, knew all the greats, and was first and foremost, a film fan. There’s a reason he was so believable in his intros – he knew this stuff forward and back, and genuinely LOVED IT.

In college, I had to do a fake campaign about an issue I cared about. So, of course, what did I choose? Classic film. My campaign poster is below. This is really the crux of why I started this blog in the first place. The only way to keep these films alive is through new, young audiences. After reading an obit article about Robert yesterday, I realized that my brilliant marketing slogan was low-key stolen from Robert’s mouth.

I was lucky enough to meet Robert at the first TCM Festival when I was just seventeen years old. Though our interaction was brief, his kindness, openness, and passion was apparent. I think he really enjoyed that we’d attended the festival as a family, something that was rare the first year. My brothers routinely made fun of my dad’s adoration for Osborne, but it was all in good fun.

Though he may not have realized it, he was just as important as the people he interviewed. Literally, he would get a standing ovation at every TCM Festival event he hosted. People cared about him, they felt like they knew him. I felt like I knew him. The best way to honor him is to continuing to pass on the gift that is classic film. Keep introducing classic film to the next generation because really, when you think about it, is a movie old if you’ve never seen it?