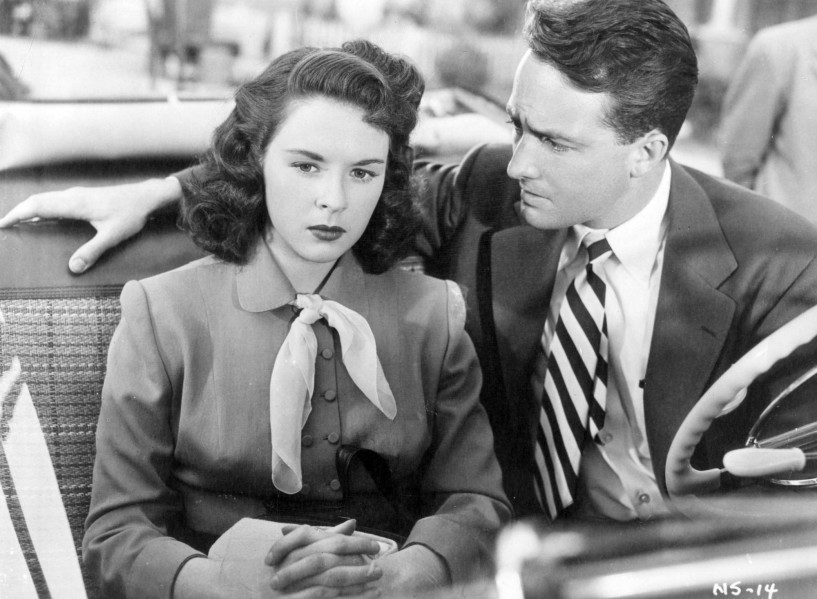 Ida Lupino was a very special person. As you know if you read my blog, I only recently discovered Ida and in my last post I covered Ida’s acting, which was stupendous in its own right. However, she was a female director in a time when that was basically unheard of and the most incredible thing is that she didn’t just make fluff. Like one of her female predecessors, Lois Weber, Ida wanted to make films about social issues, things that mattered and she did.

I saw Outrage at the TCM Film Festival this year and was blown away by how modern it feels. Yes, there are certain period things that make you remember it’s an old movie, but the subject matter and how Lupino deals with it, are more topical than ever today.

Everything seems to be going well, except for one slightly annoying thing: a man who runs the food cart at her work verbally harasses her on an almost daily basis. Like most women, Ann deals with it because what else could she do?

However, one night, when walking to her car, that man goes from verbal harassment to rape, leaving Ann shameful and confused. The rest of the film finds Anne running from her shame, unable to come to terms with what’s happened to her.

Here are a few reasons you need to check out this film!

As a young woman trying to make it in this business, I bow down to the goddess that is Ida Lupino. I’m currently in the midst of reading a biography of her life and am so fascinated at the way she carried herself, despite the heartache and the struggle she endured.

She found her way into directing when the director of one of the film’s she was producing fell ill early into the shoot. Ida simply took over to save the film and the rest is history. She wanted to make films outside the studio system, what we would now call independent film. Thus, her films were filled with unknown actors.

Ida tackled difficult subject matter with patience and didn’t believe in traditional happy endings, one of the many things I love her movies for.

This tribute is a great introduction to Ida. 🙂

This film hinged on whether or not you believed in Ann’s distress, her psychological trauma. Many dramatic moments in Outrage simply focus on Ann’s face. Mala Powers is exceptional in the role; she almost feels like a stand-in for Lupino had she acted the part. You feel Ida in Mala Power’s performance. And quite honestly, she moved me to tears.

She didn’t go on to many other projects of note, but continued to work well into her 70s.

The Direction and Cinematography

I know I already said Ida Lupino, but for a film not shot in the studio system, with a very low budget, the direction and noir-esque shots are gorgeous and suspenseful.

Sadly, it’s just as relevant today as it was then. Even, more so.

This movie doesn’t preach to its audience. It doesn’t tell women how to feel or how to cope or even that you ever really heal from an experience like this. However, I feel like one message the movie sends loud and clear is that victims of sexual assault should not feel shameful. They didn’t bring it on themselves by wearing too short a skirt or being too nice or leading someone on. The blame lies with the person who assaulted them and I think that for 1950, when no one was paying attention to this issue, that message is radical.

Just in the past year, we’ve finally seen some strides being taken in society to not only discuss this issue but say clear and unequivocally that harassment is wrong and will no longer be tolerated. I’m an idealistic person and I’d like to believe things will change, but too often, movements fade and people forget the fervor that incited it.

Ida Lupino made this film seventy years ago, because even then, sexual harassment and assault was an unspoken thing many women had to deal with, often with shame and secrecy. I hope in another seventy years this status quo will not exist.

I was gonna link the trailer below, but the whole film is on youtube. You’re welcome. 🙂

If you watch the film and like it, drop me a comment or send me an email at thegirlwhoknewtoomuch46@gmail.com!

I’ve been woefully negligent of this page for the last six months. Life got in the way.  Isn’t that the way of things? But, now, with renewed energy, I want to continue my movie posts and tell you what you need to be watching…because I need to tell someone!

In April, I attended the TCM Film Fest, as I do every year, and of course, was happily surprised by a number of movies that I never would have watched otherwise. One of those brilliant standouts was Michael Curtiz’s The Sea Wolf.

Now, if you’re like me, there could be two things standing in your way of watching this film: its blah title and those dreaded words…film noir. My dad’s rolling his eyes, but I think it’s well known from this blog, that film noir doesn’t tend to be my favorite genre. I know. I know. It’s not a genre, it’s a style. Whatever. I associate film noir with death and femme fatales and generally that’s just not my thing.

However, this movie is so much more than it appears to be. It’s a great example of the complex, layered acting that took place in the studio era. And, I won’t lie, it’s helped by some very specific and severely underrated actors, John Garfield and Ida Lupino. If you’ve never heard of either of them, you’re going to be obsessed, BELIEVE ME.

If you’re unfamiliar, The Sea Wolf follows a three fugitives who find themselves aboard a ship captained by the tyrannical Wolf Larsen. They talk about philosophy, fall in love and may or may not make it off the ship alive!

Here’s why you must add The Sea Wolf to your queue ASAP!

Ida Lupino is someone that a year ago I had never heard of. But, through a midnight watch of Devotion in which Ida played author Emily Bronte, I went down the Ida rabbit hole, learning about not only her prowess as an actress, but her major strides behind the camera, working as one of the only female directors in the studio era. Her story is fascinating and so inspiring TBH.

John Garfield is another fascinating character actor. He was a predecessor to actors like James Dean and Marlon Brando, an actor who didn’t play by the rules, who was unconventional and gritty and real in every part he played. The Sea Wolf is the first John Garfield movie I saw and let me tell you, I think I have a very real crush on him…it’s too bad he’s dead/his character was not real and he was acting. Garfield died very young, partially from an illness that hit him as a child, partially it is thought from the stress of being one of the many accused during the Hollywood Blacklist era.

And you can’t forget Edward G. Robinson who really owns the movie. His complex portrayal of Wolf Larsen, Captain of the vessel Ida and Garfield are being held captive on is more than a reason to watch the film by itself.

It’s obviously based on an early 20th century novel by Jack London…but again, don’t let that put you off. It’s really a story quite like something like Lord of the Flies. The plot is not the star…it’s more of a pondering of philosophical ideas. What is right? What is wrong? Does a person start evil or do they become evil through a turn of events?

This discussion is had through the conversations between Wolf Larsen and Humphrey van Weyden (Alexander Knox), a young author and writer Wolf takes a liking to. Wolf tells him that by the end of his journey aboard Wolf’s ship, Van Weyden will be a different person. He will make choices that a good person wouldn’t make.

In case you need more of a reason…you like Titanic, right? I mean, c’mon, you love it. You can say it’s a guilty pleasure, but you know that’s a lie. You love it because who could resist Leo and Kate falling in love aboard a sinking ship…”You jump, I jump, Jack!” Well, what if I told you that Mr. Cameron took a little inspiration from classic film, specifically this film for his 1997 blockbuster?

I don’t just say this because The Sea Wolf takes place aboard a ship or because there’s a love story. I say it because there are specific moments where you’ll be like…was that a line in Titanic?

I wanted to show you a gif from The Sea Wolf where there’s an eerily similar line, but couldn’t find it, but I swear it’s in there!

The Sea Wolf is an underrated gem with understated performances and moody cinematography!

I did not reveal many of the plot points of this film on purpose. I so enjoyed going into it with zero expectations. It was a pleasant surprise and I was mesmerized by its fabulous performances. So few films make you really worry for the main characters safety. This gritty, no-nonsense, layered complex film is so worth it, even with the entire movie having been shot on a sound stage.

I wish more people would check it out!