This past Saturday marked the 117th birthday of legendary director Alfred Hitchcock. The occasion made me think of one of my favorite Hitchcock films, Young and Innocent, or as it’s also known, The Girl Was Young. It was one of his early British films, which he made in between The 39 Steps and The Lady Vanishes!

It’s not one of the acclaimed Hitchcock films you’ll see on those lists of the best movies ever made. It is a quiet film, one which was made on the cheap (Hitch used lots of set-models in this one) and which is not perfect by any means. Still, it’s immensely enjoyable due in large part to its charming leads.

If you’ve never seen Young and Innocent, here’s my quick synopsis. Nova Pilbeam plays Erica, a policeman’s daughter who befriends an escaped convict. Her co-star, the escaped convict, Robert Driscoll, was played by the handsome and witty, Derrick De Marney. Driscoll is accused of murdering a famous film actress and with the evidence stacked against him, he runs away. Erica ends up helping him, first reluctantly – then, because she believes in his innocence…and y’know, ends up falling in love with him.

Here are just a few reasons Young and Innocent is a Hitchcock staple:

Nova Pilbeam is a revelation in this film. She was only eighteen at the time, but she projected supreme confidence and poise beyond her years. She’s also a kick-ass feminist heroine, using razor-sharp quips as her weapons.

Pilbeam was a famous child actress who also starred in Hitchcock’s original British The Man Who Knew Too Much in 1934. Although, she didn’t star in much after this film – she retired in the 1940’s – it’s easy to recognize her deep talent. She had an expressive face and personality. Her performance in this film is memorizing.

Also, how great is her name? Just imagine introducing yourself as Nova Pilbeam. Talk about original.

Similarly, Derrick De Marney is also ridiculously likeable in this film. The way he looks at Pilbeam should make any girl swoon. Or, I should say, it makes THIS girl swoon. Robert is witty and snarky, but sweet and he makes it clear early on, that he’ll do anything for Pilbeam’s Erica.

The script was adapted from a mystery novel called A Shilling for Candles which was written by Josephine Tay. Several writers worked on the script including Charles Bennett, Edwin Greenwood, Anthony Armstrong, Gerald Savory and Hitchcock’s wife, Alma Reville. Still, with so many cooks, the script turned out quite strong. It was curt and to the point, while still having wonderful, snappy dialogue.

One of Hitchcock’s greatest strengths was in knowing how to tell a story visually. Since he started in the days of silent films, he was used to it. Thus, his shots were more dynamic. He was interested in putting you in the character’s shoes – small looks where decisions were being made. He teamed with cinematographer Bernard Knowles on Young and Innocent, who also shot The 39 Steps.

Additionally, I think Hitchcock’s use of models was very interesting. He believed that whether the setting was “real” or not was of little importance. If the audience believed in the characters and the plot, then what did it matter?

BONUS: If you’re at all interested in Hitchcock, I think you’ll find this clip interesting. In it, he discusses visual storytelling and it’s fascinating.

The romance is really the center of this film, although, of course, it’s all implied. The chemistry of Pilbeam and De Marney carries the film, even though shooting it wasn’t always so easy. Hitchcock wanted the scenes to be fast and he would apparently time them. Also, it was Pilbeam’s first romantic role.

Nova Pilbeam, who passed away only last year, was interviewed in 1990. She recalled seeing the film in a theater with her daughter years after she made it, saying, “What amazed me was that, firstly, the cinema was full and, secondly, it was full of young people. I would have thought that “Young and Innocent” was a very dated film, yet they seemed to find it fascinating” (Pilbeam). Great films and performances are never old. The same goes for Hitchcock himself. His films will surely be remembered as long as cinema is alive.

The film is now in the public domain and as such, is available to watch on Youtube for free. I found one that is wonderful quality. Enjoy the film and let me know what you think of it in the comments! 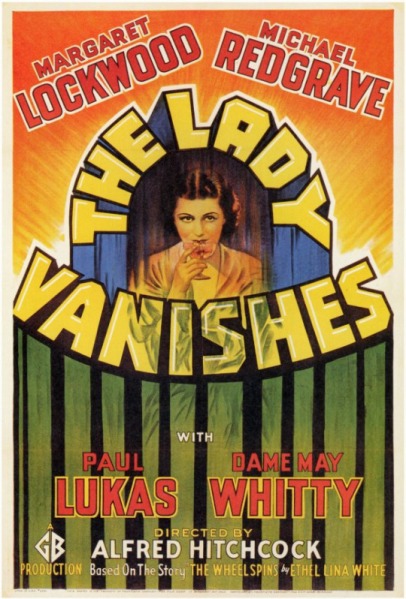 Okay, let’s get real. Hitchcock is legendary. But, if I were to ask an average person on the street to name a Hitchcock film, my guess is that most people would probably say Psycho which, although a great movie, makes me sad because Hitchcock has so much more to offer than a skeleton turning around in a chair.

Before we get to The Lady Vanishes, let’s do a little Hitchcock recap. Hitchcock started in the early 20th century, directing silent films in England. There, he learned how to tell a story visually, without sound. He made several films during that time and some of his British movies are actually my favorites.

Alright. Let’s get to The Lady Vanishes. 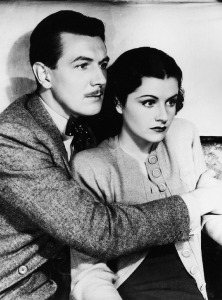 This movie is one of my favorites for many reasons. One, it takes place on a train. I know it sounds weird, but a lot of my favorite movies have taken place on trains. I’ve never been on a plane so maybe I just have some weird attachment to trains. I don’t know. But, regardless, the train is a great stage for the drama to unfold – maybe because it’s an enclosed space.

Also, I would be lying to you if I said the romance wasn’t a huge selling point. I love the dynamic between the two leads – the witty banter and the fact that they hate each other for most of the film. Well, she hates him.

The other great thing is the humor. Now, it’s British humor so it can be a little dry – not really a problem for me, but I know some people who can’t take it. Hitchcock knew that the suspenseful moments hit harder if there was light and the movie has some very humorous moments.

I’ve shown this movie to maybe 10 people and it’s never once disappointed. Even my friends who are not into classic film appreciated it. Hopefully, you’ll fall in love with it like I did. Just don’t be surprised if you have a dream that night about it. I had the strangest dream right after I watched..I was on a train and there was an old man next to me..and you know what, never mind. You don’t care. Just watch the movie.