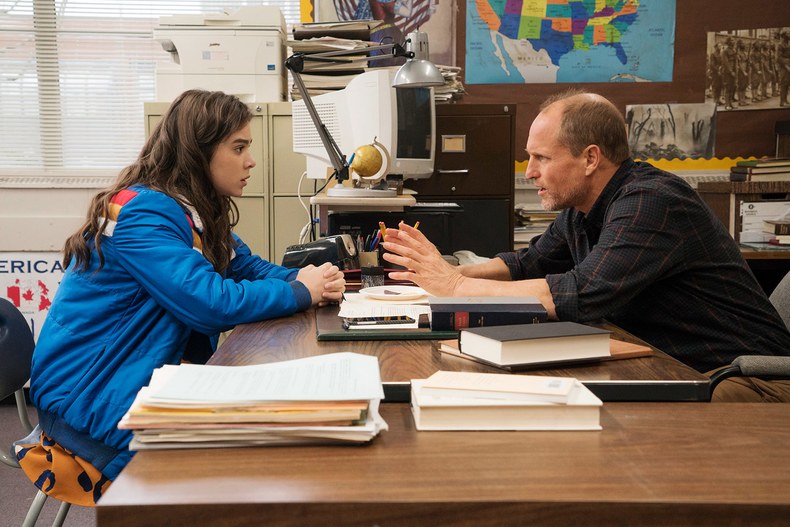 It’s been a shitty year for movies. It’s become kind of a slog to go to the movies. Most times I come out and think, That wasn’t really worth it. I almost exclusively write about classic films on this blog, but I needed to make an exception after seeing Kelly Fremon Craig’s The Edge of Seventeen.

The Edge of Seventeen reminded me of so many things I love, but what astounded me most about it was how completely it got into a teen girl’s mind. The only other project that came even close was the seminal 90’s teen show, My So-Called Life.

Here are just a few reasons you need to get your butt off the couch this weekend and see The Edge of Seventeen:

I’m gonna be real with y’all. The most important role in this film is Nadine and Hailee Steinfeld knocks it out of the park. She’s so real and awkward and honest and just, agh, this was me in high school. No doubt she’ll be going on to great things…

The supporting cast is also strong, especially when led by Woody Harrelson who plays her smart-ass teacher, Mr. Bruner. He’s his usual smarmy self. He brings out the major laughs of the film.

Additionally, Hayden Szeto is also wonderful as Erwin Kim, Nadine’s awkward, nerdy love interest. There are a few moments where he’s so sincere you’re like, Um, if she doesn’t want you, I’ll date you!

Blake Jenner, Haley Lu Richardson, and Kyra Sedgewick are good too. Unfortunately, they’re just not given much screen time.

Oh, and yes, that is Andi, aka Meredith Monroe, from Dawson’s Creek as Harrelson’s wife.

Where do I start? I was lucky enough to read the script a few months back and even as a script, it was fantastic. The dialogue is witty and awkward and real.

The plot feels down-to-earth. This is, to me, what really separates it from films of the John Hughes ilk. I love those movies as much as the next girl, but I know I’m not watching reality. In this, every beat feels like it could really happen. And it doesn’t end with fireworks or a magical kiss, just our main character moving one step forward in her life.

What the script also does well is comment on the loneliness of being a teenager. I know, I know. It’s been done before. But, for some reason this one really felt real to me. I think it’s partially because I’m similar to Nadine. I hide my awkwardness and insecurity with sarcasm and witty retorts. It all comes down to loneliness, not feeling like you fit in, thinking that you’ll never quite be normal.

Oh, and Nadine’s whole way of explaining her whole not driving thing…TOO CLOSE TO HOME.

Kelly Fremon Craig also wrote the script for another coming of age film a few years back, Post Grad which starred Alexis Bledel. I remember liking the film, but feeling that it was just a bit forced which is the exact opposite of the feeling in this film.

Though the script was fantastic, it was Fremon Craig’s direction which brought this movie to life. Certain stylistic choices made all the difference. For instance, in a major showdown with her brother, Nadine reveals her true feelings quietly, no overly sappy music. She just quietly states how she feels and it breaks you.

There’s a sensitivity and an understanding of that age that Fremon Craig clearly has. Every problem feels like it’s the end of the world and Craig understands that and validates it.

This may be a bit dumb, but I really enjoyed the music. It’s an eclectic soundtrack, featuring Santigold, Angus and Julia Stone, and Aimee Mann.

The teen, or coming of age genre has been overrun by cliches in past years. And don’t get me wrong, this film has some of those cliches too. But, it stands out because it’s rooted in reality. I felt like it captured something special in its writing and direction as well as its performances, something human and completely relatable.

If you were an awkward teenager, this film is sure to resonate. I’m excited to see what films Kelly Fremon Craig goes on to make. So, if you’re looking for Thanksgiving weekend movies to see, please consider this one. You’ll laugh, you’ll cry, you’ll cringe. It’s got it all!